> Early Music CDs>JOSQUIN DESPREZ - In Principio
Are you an Amazon customer? Pay now with address and payment details stored in your Amazon account. 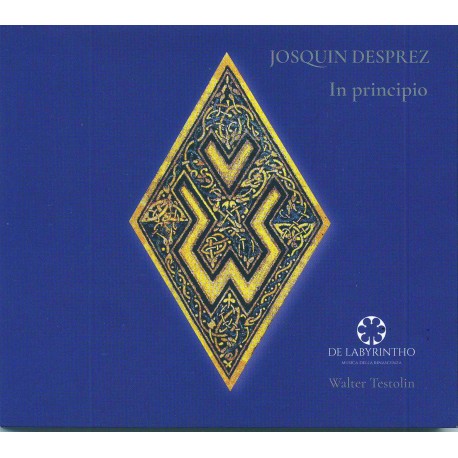 The subject of the present disc are motets by Joaquin that are based on biblical and devotional medieval texts, describing chronologically the ancestry of Christ, events in the life of the Virgin Mary, Crist's coming on earth, and his early infancy.

Since its formation in 2001, De Labyrintho has dedicated much of its work to the work of Josquin Desprez, a musician who is loved, studied and performed more than any other. The group has dedicated its first three recordings to various concert programs to his music.
Six Masses, five mass sections, forty-eight motets, twenty-one chansons, a total of one hundred and four compositions by the Maestro have been performed in concert or in disco by De labyrintho during these years, making the group one of the most assiduous performers in the world of music of Josquin.

The advent of the fifth centenary of the death of its tutelary deity could only be celebrated by the group and its director in the most intense and rich way possible.

For this reason the JOSQUIND500 project was born.

On the 27th of August, 1521, Josquin Desprez, the greatest musician of the Renaissance, died. Seen almost as an evangelist by Martin Luther, at the time he was considered for music what Michelangelo was for painting and sculpture. With his strikingly innovative work, he gave birth to a new form of music. With its deep sensitivity to the text, his music is the perfect product of 15th century Flemish counterpoint, as well as the progenitor of Italian late Renaissance and Early Baroque music. In Josquin's music, much like in Dante's poetry, humanity and theology, simple daily life, and a desire to describe the indescribable divine, converge, reaching a level of power not known before. It is this marvellous art that the ensemble De Labyrintho would like to pay tribute to in two cds, five hundred years after the composer's death. To realize these two new recordings, De Labyrintho needs your support, always important, but even more so in this troubled period.

18 other products in the same category: