> CHE TI GIOVA NASCONDERE
Are you an Amazon customer? Pay now with address and payment details stored in your Amazon account. 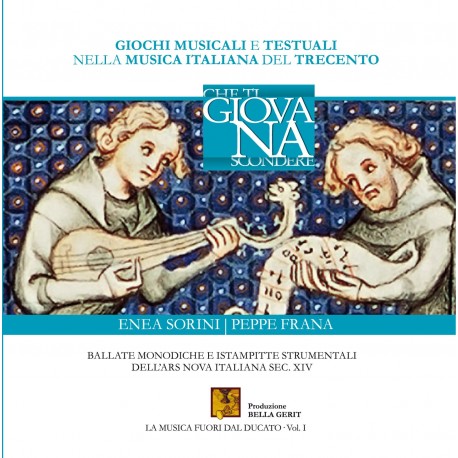 “Games of Music and Words in the Italian Ars Nova”

Containing songs from the repertory of secular monody of the Italian Ars Nova, this recording includes four of the five monodic vocal ballate of the Rossi Codex¹ (tracks 1, 3, 5, 13) anonymous pieces dated in the first half of the fourteenth century, and ballate contained in manuscript Squarcialupi² (tracks 2, 4, 7, 8, 10, 11, 12) attributed to only three composers, Gherardello Da Firenze, Lorenzo Masi (also a Florentine), Niccolò da Perugia. The poetic style of these works manifests a strong influence by the troubadours as evidenced by the frequent use of senhal - the concealment of the name of the lady to whom the ballata is dedicated in one or more words of the incipit.

A unique contemporary instrumental repertory is found in the famous London Codex³ (tracks 3, 6, 11) consisting of a series of Saltarelli and Istampitte, complex monodic compositions, that, while preserving musical forms of dance, expand into a veritable  "musical labyrinth” in a celebration of virtuosity and experimentation.