> Ensemble BELLA GERIT>DE DIVINA PROPORTIONE
Are you an Amazon customer? Pay now with address and payment details stored in your Amazon account. 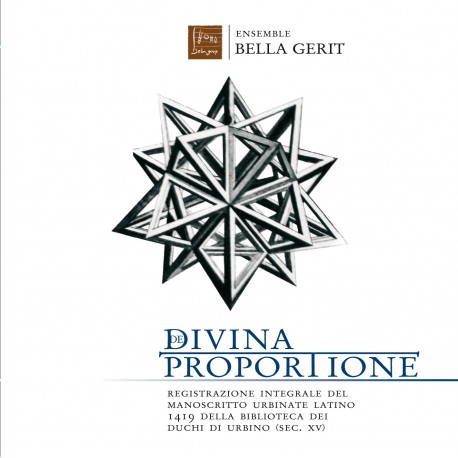 Complete recording of Urbinate Latin manuscript 1419 of the library of the Dukes of Urbino (sec. XV).

Urb. Lat. 1419, in its fragmentary incompleteness is the equivalent of a pictoral sketch, the first outlines of a painting. A careful look at the creative process behind it can allow, other than the reconstruction of the work, a stimulus for the reflection upon the arristic/speculative spirit which characterized the era in question and its protagonists. The unifying spirit, the will to fuse art with scientific doctrines in a great unique svstem which would have given life to the perfect work in a mystic transcendence. Urbino was the cradle of such pre-Renaissance symptoms, to have given birth to a never-ending list of poets, architects, mathematicians and creators of precision tools between the XIV and XVIII century. In this city and for the library of the Dukes of Urbino, Piero della Francesca, Leon Baitista Alberti, Luca Pacioli, dedicated their written theo­retical works and laid the foundations for the arrival of a new era. Fven this manuscript can be found there, among the giants and it carries in irs modest si/e the same ambitious spirit. In addition to those of music, in it there are fascicles of Law, logic and even a Latin-Italian dictionary. From the city, symbol of this spirit, the musicians concretize their thought in a musical work built upon the golden prin­ciples of proportion and the 'secret science', to create a bridge from a golden age to they, to invent a new Renaissance, but all that will be the subject of study and application on the second CD.