> Ensemble BELLA GERIT>AMINTA
Are you an Amazon customer? Pay now with address and payment details stored in your Amazon account. 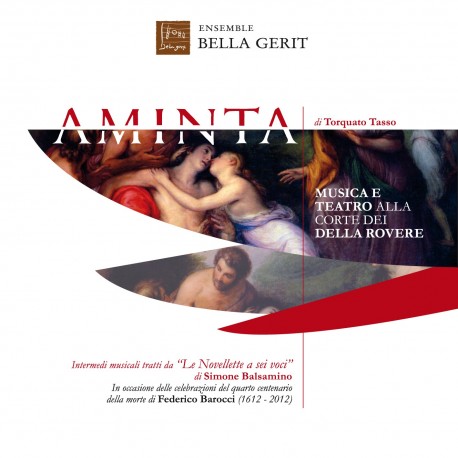 Registration of pastoral fable AMINTA of Torquarto Tasso; intermediate music from "The Novellette six voices" Simone Balsamino. On the occasion of the celebrations of the fourth centenary of the death of Federico Barocci (1612 - 2012)

An unusual approach has been chosen in interpreting Simone Balsamino's Novellette, which has the aim of en­hancing the theatrical/scenic aspect of his music, trying to bring the "drama" (from the Greek drama — action) to the forefront so as not to create any separation from the re­cited part. The Novellette undoubtedly belong to the genre Commedia Anuomca (Madrigal Comedy), that is, (as the mu­sicologist Alfred Einstein writes) «a series of related mad­rigals, which, when sung consecutively, tell a story, often with a continuous dramatic plot». Here the dialogues (and therefore the characters) are not created for a single voice, but rather for a small ensemble of two, three or four voices, exactly as the Novellette indicates, where Balsamino (who sets trie whole of the third scene of the II Act to music), writes the dialogue between Aminta and Tirsi giving a small chorus of three voices to each one, and writing in me score «Li tre Tirsi uniti» (the three Tirsi together) and «Li tre Aminta uniti» (the three Aminta together). This said, it has been decided, in order to underline the dialogic nature of the Novellette, in this recording to let Aminta and Tirsi sing (speak) with one voice, accompanied by two differ­ent ensembles (the first with a lute and the second with a flute and a bass viol) which sonorously distinguish the different characters and states of mind in relation to their opposite natures.