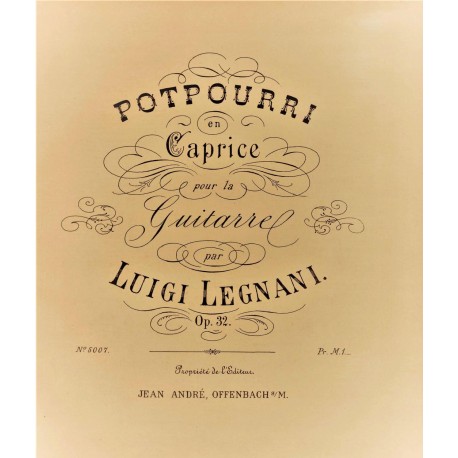 Versatile musician, singer, violinist, luthier and guitarist, Luigi Legnani is a figure characterized by many different aspects. Born in Ferrara towards the end of the eighteenth century, he was a prolific and acclaimed composer and performer. He also designed interesting solutions - finally taken also by famous Viennese instrument makers - who perfected both the guitar structure and its tonal capacity. Appreciated in 1841 as “The Paganini of the guitar” Legnani leaves us a repertoire of over 250 works, most of them unknown, ranging from purely didactic compositions to those dedicated to the general public concerts.

Raffaele Carpino, after a thorough investigation over the life and works of Legnani, finally proposes and revised his works for the first time with absolute fidelity to the original nineteenth-century scores, approaching the author’s thought with the correct philological attitude. The score used by this publication is the second edition in print, published in Offenbach in 1827 by Johann Anton André. In addition to fingering, some instrumental ligatures, marked with dotted line, have been added, as some signs of dynamics, written in square brackets and instrumental tone variations, always marked in square brackets. Some printing errors, not of major importance, of the edition of 1827, have been corrected.

The score consists of six movements, all connected in continuity with the use of modulation between tonalities, with an Andante mosso in 3/4 in the tonality of A Major; follows an Allegro in 6/8 in D Major, modulating at the end in the new tune of the third movement Largo Espressivo of just 23 beats, in C Major, with time 6/8, with modulation in the fourth time Allegro in E major, time 2/2, where there is a suggestive Recitativo that spans between different tonalities: E Minor, A Minor, E Major, D Minor, A Major, etc.