> Digital Music>GUERRA AMOROSA (digital edition)
Are you an Amazon customer? Pay now with address and payment details stored in your Amazon account. 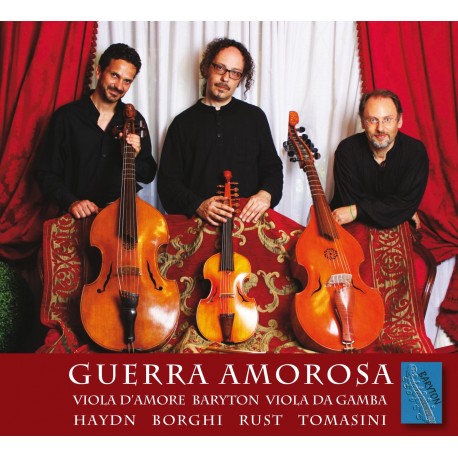 No reward points for this product.

The main source of music for Baryton is represented by the over 120 trios and divertissements for Baryton, Viola and Cello written for Prince Nicola the first Estheràzy by his Court musician Franz Joseph Haydn (1732–1809) who served him as Kapellmeister for almost thirty years. More music with different ensemble and three concertos had also been written but got lost. Most of this compositions were reserved for the Prince own private amusement (he was himself a skilled amateur player of the Baryton) and only a few of them were finally published, transcribed for more popular instruments such as Violin, Viola and Cello or two violins and Cello. Among this large number of compositions, written for chamber musical amusement and characterized by sweet major keys, the Trio n.96, part of the present CD, surely stands out with its b-minor tonality.

More music for the Prince was also written by the first violin of the Court Orchestra Luigi Tomasini (Pesaro 1741 – Eisenstadt 1808). Tomasini was hired at the court when he was sixteen and was probably one of Haydn’s own pupils. Of the 24 Trios composed for Baryton we propose the Trio n. 34 in e-minor, with clear Sturmisch features.

The intention of the Trio Guerra Amorosa has been indeed to create an original, inedited ensemble, adapting and assigning the original parts for Baryton and Viola to Baryton and Viola d’Amore and replacing the Cello with the Viola da Gamba. These three instruments together create a timbric mixture that is unique and fascinating.

Besides the Trios the Cd also proposes two sonatas drawn from the vast repertoire of duos written for Viola d’Amore: the little sonata “La Paisanne” of German composer W. F. Rust (1739-1796) who was a virtuoso of the violin and pupil of F. Benda and C. P. E. Bach.; the Sonata in D major for Viola D’Amore and Violone by L. Borghi (1745-1806) who was a Violin and Viola player from Bologna but mainly worked in London and was a pupil of G. Pugnani; this sonata is an adaptation of three different movements drawn from the six Sonatas for violin and bass Op. 1, published in Paris in 1772.