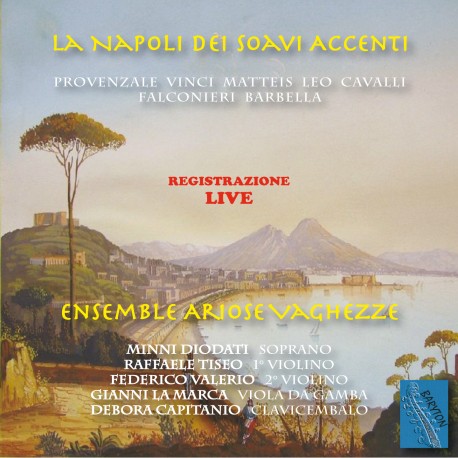 No reward points for this product.

The "Ariose Vaghezze" Ensemble dedicates this concert to musical Naples in the early 1700s with a title that goes well with the song by Monteverdi published in 1632 and contained in "Scherzi musicali cioè arie et madrigali”:

This quote from Monteverdi inspired the choice of title. The Naples of the Soavi Accenti is precisely that of the late 1600s / early 1700s.

The authors, all active in Naples in the period described (with the sole exception of Francesco Cavalli, born in Crema but Venetian by adoption), lead us on a highly effective "musical" journey.

The live performance enhances the taste and tradition of the time and the use of baroque instruments makes us better enjoy the works proposed the following authors:

4 other products in the same category: